The fine old brick and stone house in the west part of Keosauqua, Iowa, now owned by the Van Buren County Historical Society and known as Pearson House, was built in the period of 1845 - 1847. 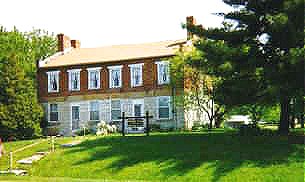 Benjamin Franklin Pearson, the builder, was a skilled stonemason who had intended to build the entire house of stone, but after erecting the first story, he accepted a quantity of brick as payment on a debt so he used the brick to complete the house.

The second floor was originally one large room and was used for Methodist Church services.

The Pearson House finds its place in History as a station on the Underground Railroad, that dramatic escape route of runaway slaves from southern states. A hide-away under the floor was reached through a trap door.