The Van Buren Courthouse in Keosauqua is the oldest courthouse in Iowa which has remained in continuous use and the second oldest in the United States to hold that distinction. When finished in 1843, it was one of the largest buildings west of the Mississippi River. 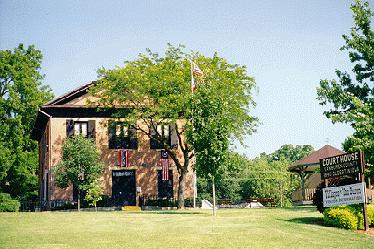 After Keosauqua was chosen as county seat, the construction of the courthouse began in July 1840. After first awarding the building contract to others, it was transferred to Edwin Manning. He accepted it for $1,712 at 15 percent interest and $5,000 "in bonds and mortgages."

When the building was finished, the Federal style structure had a tower and two walnut staircases. The first-story walls were built 22-inches thick and the second-story with 18-inch walls. The supporting timbers and frames are of oak with native walnut used in finishing the interior. Later the tower was removed from the roof and the two spiral staircases were replaced by the present one. Upon its completion, the courthouse was considered one the most beautiful structures in Iowa.

The courtroom, still in use today, occupies the second floor. For many years, it was the largest in the state unbroken by columns or pillars. Framed pictures--dating back over the years--of judges who have served the court, old maps, and other mementos adorn the interior.

The courthouse is open to the public during business hours and tours of the courtroom are possible while the court is not in session. The offices of the Villages of Van Buren are located on the first level.